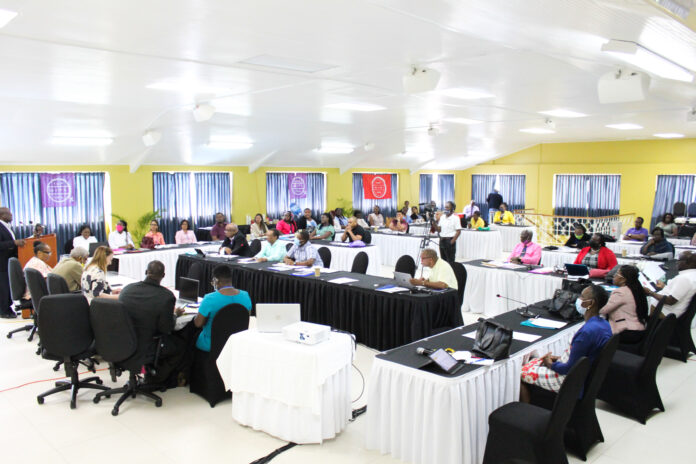 The ratification of conventions to interdict work place harassment and include rights for domestic workers in the Caribbean are among talking points for trade unionists gathered for a two-day workshop in Antigua.

Trade unionists looking to empower their members gathered at the headquarters of the Antigua Barbuda Workers Union (ABWU) for the first time in five years on Thursday, hoping to regroup and to create a working plan to deal with employment issues post the Covid pandemic.

Ronaldine Burgess – outgoing regional president of global union federation IUF of which the ABWU and the AT&LU are local affiliates – said the group needs to discuss why governments are struggling to ratify these conventions.

“We cannot understand why a government cannot move swiftly and quickly on violence and harassment because it has no place in society,” she said.

Antigua and Barbuda was the first country in the Caribbean to ratify the Convention on Workplace Violence and Harassment and is currently the only country in the Caribbean region that has ratified the Domestic Workers Convention, which recognises and protects domestic workers as employees. That convention is expected to come into force on July 28.

But much more than ratifying the conventions, is enforcing them. Burgess believes having strong legislation to protect workers against these infractions may lead to more reporting. For that she said the unions must work with government and society.

Burgess said the unions are willing to take these matters to court if they are unable to solve the problem between the union and the employer.

The group will also discuss how to evolve and develop the agenda of the IUF over the next two days, including how to define the rules of the recently formed regional women’s and youth committees.

Guest speaker, former prime minister of Antigua and Barbuda Dr Baldwin Spencer, said it was a “critical juncture” for trade unionism worldwide, and it demands that trade unions protect the rights of workers.

Despite the many challenges, Sue Longley, the IUF’s first female General Secretary said there was a “silver lining” to Covid-19 that brought out the best side of the trade union movement.

“We mobilised in solidarity to support each other. It reminded us very much of the work we have to do as trade unions to improve occupational health and safety.

“We had to demand that measures were put in place urgently to protect workers around the world,” she recalled.

The opening session of the sixth IUF Caribbean Regional Conference is one of the largest meetings of trade unionists across the Caribbean since it now includes a youth and a women’s committee.

Over 50 members from more than 10 countries are participating in the two-day conference which focuses on workers’ rights in a post-pandemic world.

The IUF has almost 400 affiliate unions in over 120 countries.

The event is being hosted jointly by the ABWU and the AT&LU.