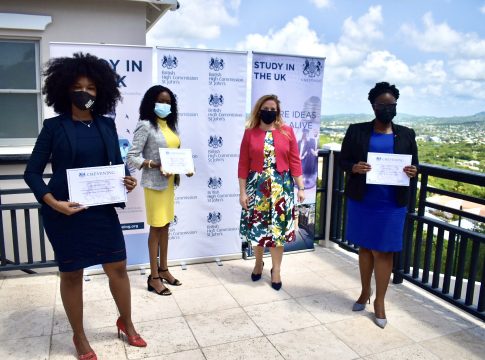 The 2021 Chevening Scholars for Barbados and the Eastern Caribbean were officially announced yesterday by British High Commissioner, His Excellency Scott Furssedonn-Wood.

Fifteen fully funded scholarships were awarded to successful candidates from Barbados, Antigua and Barbuda, Dominica, Grenada, St Lucia, St Kitts and Nevis and St Vincent and the Grenadines, to pursue Master’s Degrees in the UK.

The third scholar is Malaeka Goodwin who will pursue Forensic Accounting at the University of Portsmouth. British High Commissioner to Barbados and the Eastern Caribbean, His Excellency Scott Furssedonn-Wood said: “I am delighted to see the number of scholarships that continue to be awarded to the region each year.

The wide array of successful scholars from Barbados and the Eastern Caribbean speaks to the depth of talent in this region. “If you are someone who is interested in applying for Chevening, let this success be an encouragement to follow through on that desire; and submit your application before the deadline.”

Resident British Commissioner to Antigua and Barbuda, Ms Lindsy Thompson, met all of the scholars earlier this week to officially congratulate and honour their achievement.

Ms Thompson noted this was the second year in a row that Antigua and Barbuda was awarded three scholars, which is testament to the quality of human resource in this country.

She strongly encourages this year’s applicants to be diligent and commence their application process. Applications can be made for Chevening Scholarships at www.chevening.org/apply for the 2022 – 2023 academic year.

The application period closes on 2 November, 2021.