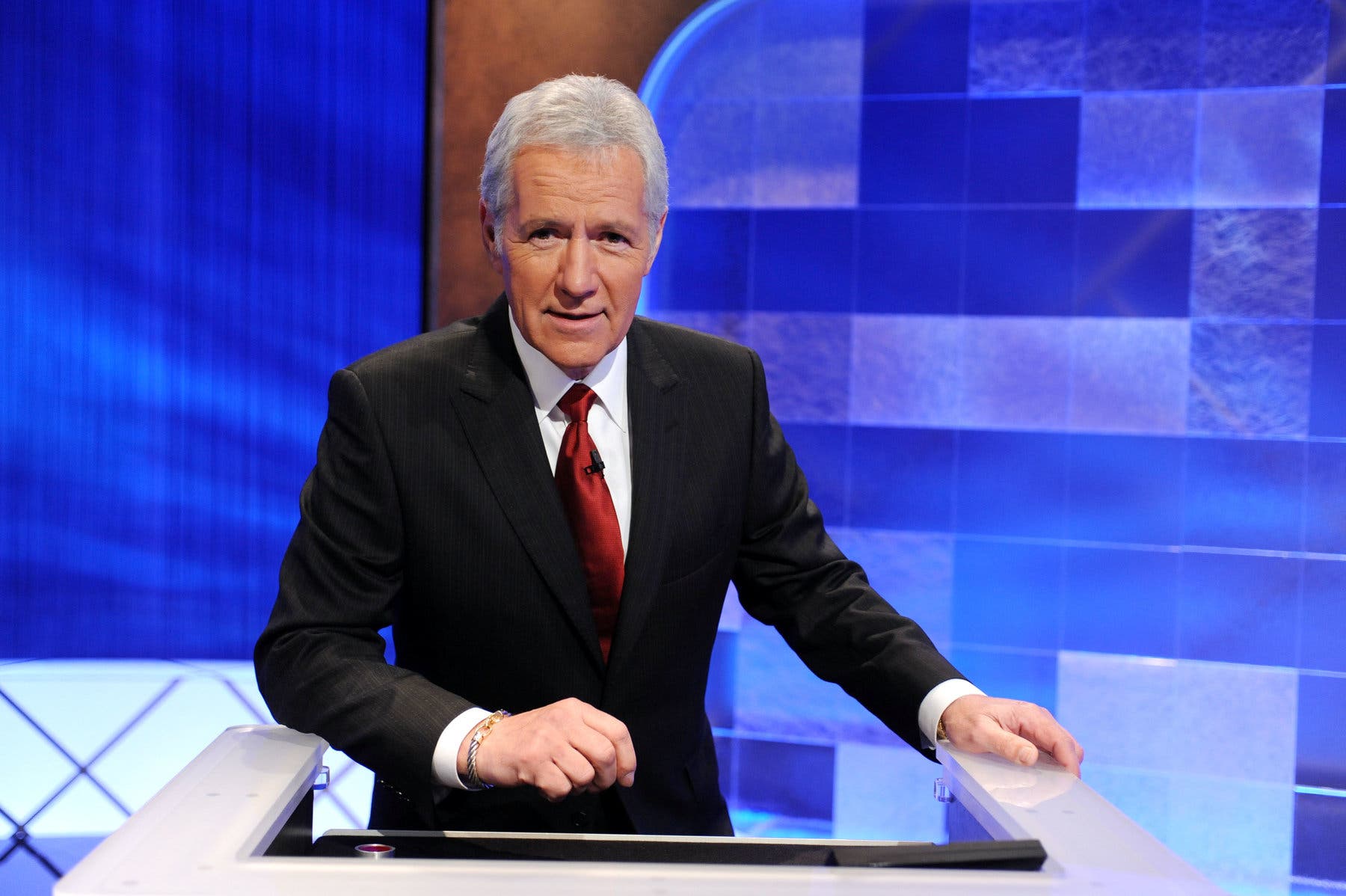 (The New York Times) – Alex Trebek, who hosted “Jeopardy!” for a record-setting 36 years and brought an authoritative and unflappable persona to the quiz show’s peculiar conceit, in which questions are delivered as answers, died on Sunday. He was 80.

The death was confirmed by the show’s producers. They said that episodes of the show hosted by Mr. Trebek would air through Dec. 25 and that they had not made plans for a replacement.

Mr. Trebek had announced in a video on March 6, 2019, that he had received a diagnosis of Stage 4 pancreatic cancer that week. He said that like many others with the disease, he had no symptoms until it had spread throughout his body. He delivered the news from the show’s set, wearing, as usual, a bandbox-fresh suit and tie as he spoke straight to the camera without sentiment or histrionics.

As a host, Mr. Trebek was the essence of durability. In the decades that he had captained “Jeopardy!” more than 400 other game shows came and went. “Jeopardy!” endured, with millions of Americans organizing their weeknights around the highbrow program in ritualistic fashion, shouting out the questions to their televisions as Mr. Trebek enunciated the answers with his impeccable diction.

One of the chief appeals of the show, apart from its intellectual challenge, was its consistency. Over the years, its format stayed reliably familiar, as did Mr. Trebek, though he trimmed back his bushy head of hair, grew grayer and occasionally sported a mustache, beard or goatee.

Otherwise he was a steady and predictable host — a no-nonsense presence, efficient in his role and comforting in his orderliness.

During the game, he might occasionally raise an eyebrow and say “Oooh, noooo, sorry” or repeat a clue with a whiff of condescension; he told New York magazine that when contestants missed obvious answers, he deliberately struck a tone that was meant to convey: “How can you not get this? This is not rocket science.”

Through it all, he kept the game running on its strict timetable.

He started hosting in 1984, when the show returned to the airwaves after a hiatus. Since then he has been the only host, helming every episode except one, on April Fools’ Day in 1997, when he swapped places with Pat Sajak, the host of “Wheel of Fortune.”

Mr. Trebek and Mr. Sajak had a friendly rivalry over the years as they led two of the longest-running game shows in television history. For years, “Jeopardy!” was the top-rated quiz show in America and usually the No. 2 game show, behind “Wheel of Fortune.”

A few weeks after Mr. Trebek announced that he had cancer, the ratings for “Jeopardy!” coincidentally began to soar when a contestant, James Holzhauer, a sports gambler from Las Vegas, roared through the game on a winning streak that captivated the nation.

Each night, more and more viewers tuned in to see whether he could beat the record set by Ken Jennings, a computer programmer, who scored 74 straight victories in 2004. With Mr. Holzhauer on the buzzer, “Jeopardy!” even blew past “Judge Judy,” long the top-rated show in syndication.

In the end, Mr. Holzhauer fell just $58,000 shy (over 32 games) of breaking Mr. Jennings’s record win of $2.5 million. But he boosted the show’s ratings to a 14-year high, drawing 13.3 million daily viewers. He later donated some of his winnings to charity, including to research into pancreatic cancer, in Mr. Trebek’s name.

Mr. Trebek said later that while he was taping some of the shows with Mr. Holzhauer, he was in excruciating pain.RelatedOpinion | Ken JenningsKen Jennings: What Alex Trebek Is Really LikeMarch 9, 2019How Watching ‘Jeopardy!’ Together Helped Me Say Goodbye to My FatherDec. 4, 2019

Unlike many celebrities, who often conceal any illnesses, Mr. Trebek was transparent about what he was going through. Sometimes his pain would shoot “from a three to an 11” during tapings, he told CBS’s “Sunday Morning” in May 2019.

“I taped the show, and then I made it to the dressing room on one occasion, just barely, before I writhed in pain and cried in pain,” he said.

In March 2020, he gave a one-year video update on his status, noting that just 18 percent of people with pancreatic cancer live that long.

The chemo treatments were almost too much, he said.

“There were moments of great pain,” he said, “days when certain bodily functions no longer functioned and sudden, massive attacks of great depression that made me wonder if it really was worth fighting on.”

But to give up, he said, would have been to betray loved ones who were helping him survive.

Mr. Trebek hosted more than 8,000 episodes of “Jeopardy!” In 2014, he claimed the record for hosting the most episodes of a single game show, surpassing the record set by Bob Barker, who had led “The Price is Right” for 6,828 episodes between 1972 and 2007.

Mr. Trebek once said he thought game shows did well because they avoided conflict.

“In this day and age, when there is so much societal tension, game shows are valuable because they’re pleasant,” he told New York magazine in 2018.

Some viewers were also drawn to the sense of absolute certitude that Mr. Trebek projected.

“As we get further into the 21st century, and we become more aware of the relativism of truth, there is something satisfying about Alex telling you it’s right or wrong,” Robert Thompson, a professor of television and popular culture at Syracuse University, said in an interview.The Year’s ObituariesRemembering Ruth Bader Ginsburg, John Lewis, Kobe Bryant, Chadwick Boseman, Kirk Douglas, Little Richard, Mary Higgins Clark and many others who died this year.Notable Deaths 2020

“I love that there is no discussion, no panel of experts,” he said. “Just Alex with his cards.”

Mr. Trebek spurned being called the star of “Jeopardy!” He wanted viewers to focus on the material. The show derived its drama not from any antics of his, but from the contestants and from the possibility that at any moment fortunes could shift, with an apparent loser becoming an instant winner, and vice versa.

“You have to set your ego aside,” Mr. Trebek said of his role. “If you want to be a good host, you have to figure out a way to get the contestants to — as in the old television commercial about the military — ‘be all you can be.’ Because if they do well, the show does well. And if the show does well, by association, I do well.”

“Jeopardy!” won a 2011 Peabody Award, the first time in more than 50 years that a television quiz show had been so recognized. The citation said the award, given in 2012, was “for decades of consistently encouraging, celebrating and rewarding knowledge.” It also said that “Jeopardy!” was “a model of integrity and decorum.”

The nod to integrity was significant. Quiz shows had fallen into disrepute after cheating scandals in the 1950s; the 1994 film “Quiz Show” dramatized the deceit.

In reaction to those scandals, the idea for “Jeopardy!” was born.

Merv Griffin, the talk show host and media mogul who created the show, recounted in “The ‘Jeopardy!’ Book” (1990) that he had been talking to his wife in 1963 about how much he missed the old quiz shows. But, he said, he recognized that the format had lost all credibility after revelations that contestants on some programs had been secretly fed the answers.

Well then, his wife, Julann, had said: Why not give contestants the answers to start with and make them come up with the questions?

It was a light bulb moment. Ms. Griffin said, “79 Wistful Vista.” And Mr. Griffin replied, “What is Fibber McGee and Molly’s address?” — a reference to characters on a long-running radio comedy.

The mechanics of the game, initially called “What’s the Question?” went through a few iterations before “Jeopardy!” made its debut on NBC on March 30, 1964, with Art Fleming as host.

It was initially a hit but was canceled in 1975, as NBC sought to reach a younger demographic. “Jeopardy!” returned in 1978, disappeared again, then underwent a high-tech face lift. The low-tech game board was replaced with a bank of video monitors. The theme music, composed by Mr. Griffin, was updated using electronic synthesizers. And in 1984, the show came back for good.