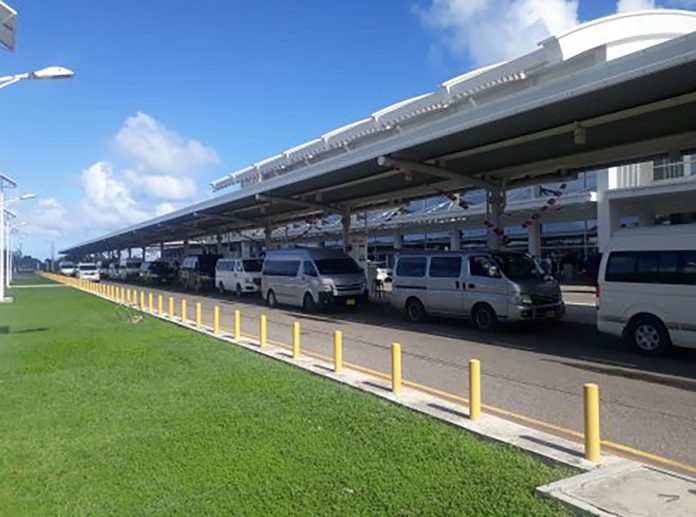 Airport taxi drivers will be writing formally to the wider Public Transportation Union to get its assistance to deal with unauthorised drivers who are transporting passengers to and from the airport.

Members of the United Taxi Company are contending that while they do not have a problem with other drivers working at the airport, there is a process that has to be followed.

President of the United Taxi Company, Ian Joseph, explains that the body will be extending an invitation to the head of the transportation union, Gregory Athill, to view first-hand what is currently taking place at the V C Bird International Airport.

“We are going to ask them to look into the matter, and they will guide us. My members are ready to do anything we have to do to protect our turf. I will be calling the chairman and we will not be ruling out militancy, and whatever they tell us will determine whether we will be singing Jingle Bells or Silent Night,” Joseph said.

Pointing out some of the challenges they encounter with unauthorised drivers, Joseph explained that for weeks they have been trying to retrieve a laptop computer for a guest who arrived at the airport and forgot the device in a vehicle that was driven by someone who is not authorized to work at the airport.

He said they have no way of tracking the device, whereas with a member of the United Taxi Company, documentation is readily available to track drivers and who they are transporting.

Joseph stated that the matter has been brought to the Antigua and Barbuda Airport Authority and other relevant bodies, and nothing has been done to remedy the situation.

Director of the body, Keithroy Benjamin, said that drivers are paying to operate at the airport through an arrangement with the airport authority and they expected the statutory corporation to play a role as it relates to enforcement.

“The airport itself is operated and managed with specific regulations and guidelines and they should have some teeth. The fact that we are also paying to operate there gives us some latitude to say what is happening cannot be right,” Benjamin said.

The Antigua and Barbuda Airport Authority will be responding to the comments made by the taxi drivers in the coming days.