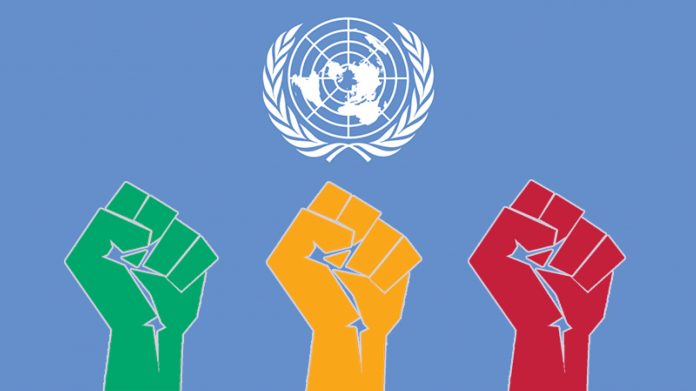 Antigua and Barbuda was both applauded and scrutinised for its efforts as the UN Human Rights Council adopted the outcomes of the country’s latest Universal Periodic Review (UPR) in its 49th regular session on Wednesday.

The speakers – which included country and civil society representatives from Advocates for Human Rights, the Alliance Defending Freedom, China, Jamaica, South Africa, UN Women, the Maldives and Vietnam – commended the twin island state for accepting most of the recommendations received during the 39th session of the UPR Working Group.

These recommendations include integrating children with disabilities into regular schools and raising awareness among women of their rights under the Convention on the Elimination of Discrimination Against Women.

The country’s leadership in environmental commitments and its efforts to bring net emissions down to zero by 2050 were hailed, as well as its commitment to environmental protection, research, and action, and the decision to ban single-use plastics.

In addition, the speakers lauded actions taken by the government to prevent trafficking in persons – through the adoption of the Trafficking in Persons (Prevention) (Amendment) Act 2019 and the establishment of the Committee – to promote gender equality and to address gender-based violence (GBV).

However, commendation was not the only forthcoming action, as Antigua and Barbuda was also called out for several shortcomings, including those surrounding GBV.

He added that, “UN Women recommends that the government further advances efforts to address GBV, including by criminalising marital rape, improving judicial proceedings and ensuring access for women to justice, and establishing a ‘best-fit’ shelter model for women survivors.”

Meanwhile, Angelina Gracy Sookoo-Bobb, representing the Advocates for Human Rights, spoke on the yet-to-be-repealed death penalty, lamenting the fact that it remains on the country’s books.

“We welcome the de facto moratorium on the death penalty, yet we are disappointed that Antigua and Barbuda [only] noted every UPR recommendation in the third cycle related to the death penalty.

“[And] we are alarmed that Antigua and Barbuda stated that it is ‘not necessary’ to officially abolish the death penalty, given the de facto moratorium.

“Though there have been no executions in Antigua and Barbuda since 1991 and there is currently no one on death row, the death penalty remains an available sentence for certain offences such as murder and treason,” she said.

Sookoo-Bobb also urged the government to bring the country’s prison conditions in line with the Nelson Mandela Rules which give guidance on all aspects of prison management, including healthcare, recruitment, training of prison staff and disciplinary sanctions.

Vanessa Moe, the Crown Solicitor in the Ministry of Legal Affairs, assured that Antigua and Barbuda was committed to promoting and protecting human rights, and was constantly reviewing its laws and policies to be in line with international human rights standards.

The twin island state supported 36 recommendations in total, while noting 119, and the majority of the country representatives pledged their support to help the country ‘get up to speed’ with respect to the outstanding recommendations.

The Human Rights Council also adopted the outcomes of the Universal Periodic Review of Eswatini and Trinidad and Tobago on Wednesday.