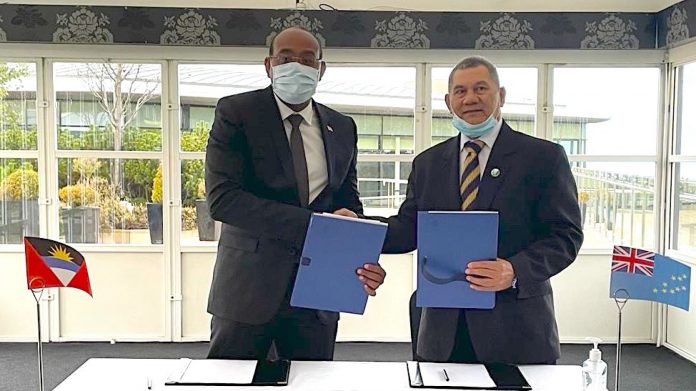 What has been called a ‘historic accord’ was signed on Sunday between Antigua and Barbuda’s Prime Minister who is also the current Chair of the Alliance of Small Island States (AOSIS) and the Prime Minister of Tuvalu.

The agreement is expected to open the way for ground-breaking litigation before international courts, offering “a novel legal path to address the severe damage to Small Island States caused by climate change”

The Agreement, according to a statement from the prime minister’s office establishes a Commission of Small Island States on Climate Change and International Law, creating a body for the development and implementation of fair and just global environmental norms and practices.

The Commission is also authorised to request advisory opinions from the International Tribunal for the Law of the Sea (ITLOS) on the legal responsibility of States for carbon emissions, marine pollution, and rising sea levels.

Membership in the Commission is open to all Small Island States whose leaders have long complained about the absence of effective mechanisms for States most responsible for climate change to compensate for the resulting loss and damage.

Browne said during the short ceremony that Small Island States emission of greenhouse gases is negligible, but they bear the overwhelming burden of its catastrophic effects, including persistent destruction, repeated costs of rebuilding and huge debts to finance resilience.

“This injustice must end.  We insist that those States most responsible for this dire situation respect their legal obligations to stop global warming and to provide compensation to its victims.  The time for empty promises is over,” he said.

Meantime the Prime Minister of Tuvalu, Kausea Natano, stressed that: “For us, climate justice is a matter of survival.  Rising sea levels, extreme weather events, the decline of marine resources – these threaten our very existence.  We see better than anyone else what is being done to our beautiful planet.  It is time to put words into action, to save Small Island States, and to save the world from impending disaster.”

The legal counsel to the Commission, Professor Payam Akhavan of Massey College, University of Toronto, and Member of the Permanent Court of Arbitration at The Hague, said Small Island States are the canary in the coal mine of climate catastrophe.

“Their fate is a warning to all humankind that the disastrous consequences of global warming are happening now, not in a distant future.  The fundamental principle of international law not to cause harm to others has now taken on an unprecedented dimension.  This historic initiative to pursue climate justice should be welcomed by all who care about the future of our planet,” he added