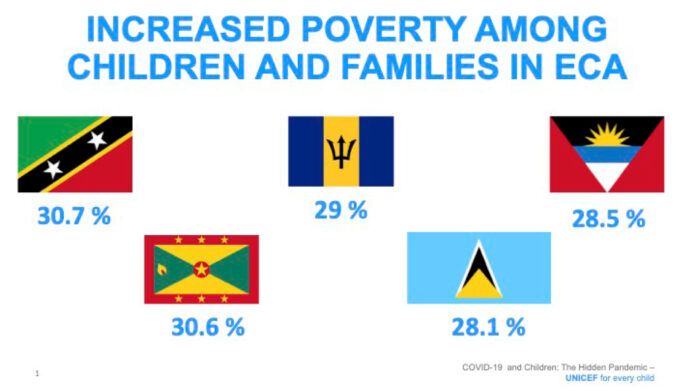 Antigua and Barbuda is among five Eastern Caribbean countries that have seen the sharpest increase in the number of children living in poverty, amid a four-fold increase in unemployment across the region due to the Covid-19 pandemic.

This is according to the UNICEF report ‘Covid-19 and Children: The Hidden Pandemic,’ the findings of which were reported to regional journalists yesterday via an online webinar jointly hosted by development agency USAID and children’s charity UNICEF.

“Children are not the face of the pandemic. But they have been among its greatest victims,” stated Tristan Ward, UNICEF’s Communication for Development Officer for the Eastern Caribbean.

The UNICEF report stated that approximately 600,000 people in the Eastern Caribbean lost their jobs due to the pandemic, which is alarmingly four times the level of unemployment seen in the wider region. This stark reality would have plunged more families into poverty and affected the welfare of children.

Ward said that the Eastern Caribbean’s unemployment rate was normally 25.7 percent and five countries exceeded that percentage due to the socio-economic effects of the pandemic.

Conversely, pandemic-era severe poverty rates for children are said to be lowest in Trinidad and Tobago (16.3 percent) and Saint Vincent and the Grenadines (18.0 percent).

Some impacts on children were cutbacks on food and health expenditure as household incomes decreased.

Children were also adversely affected by the pandemic because of increased exposure to violence – both physical and sexual – in their homes amid school closures.

Children of poorer families were also less likely to access online schooling because of lack of access to devices and internet.

Ultimately of concern to UNICEF is that the education of nearly half a million children has been disrupted in the Eastern Caribbean, which may result in reductions in future academic performance and increased dropouts.

“The potential losses that may accrue in learning for today’s young generation, and for the development of their human capital, are hard to fathom,” warned Ward.